There’s a tickle in the back of my throat and I’m doing my best to fight it off, so it’s time to turn to my Oma’s chicken soup for some healing.  At 98 years of age, she’s not making soup anymore, so I’ve gleaned her wisdom, and I’m doing my best to use the basic elements of her recipe.  Oma’s recipes are stored in her memory, not written down, so a recipe from her sounds like “a little of this, a bunch of that.”  Here’s how I make it, based on what my Oma has told me about how she makes her chicken soup:

Put the following into a stock pot:

carrot (I used one)

celery (I used one stalk)

onion ( I used one, skin removed)

garlic (I used two cloves, but only because I was running out)

bay leaves (I used two.  I keep them in the freezer because I think they taste better when I  buy them fresh & then freeze them)

peppercorns (I used about 2 teaspoons)

this time I added some parsley stems because I had them on hand, but it’s an experiment

sometimes I add an apple or sun-dried tomatoes, depending on what kind of flavour I want to impart, and what I have on hand

enough water to cover it all up

When it’s all in the pot:

Now bring to almost a boil, lower the heat and let it simmer for hours – 4-5 if you’ve got the time.

To cool it I place the pot in a sink filled with cold water.

When it has cooled a bit I pour the liquid through a cheesecloth-lined sieve, and store the liquid in canning jars.  Refrigerate it until the stock is cold, then skim off the fat.  (My relatives would have saved this to make soap.  I just throw it away.) 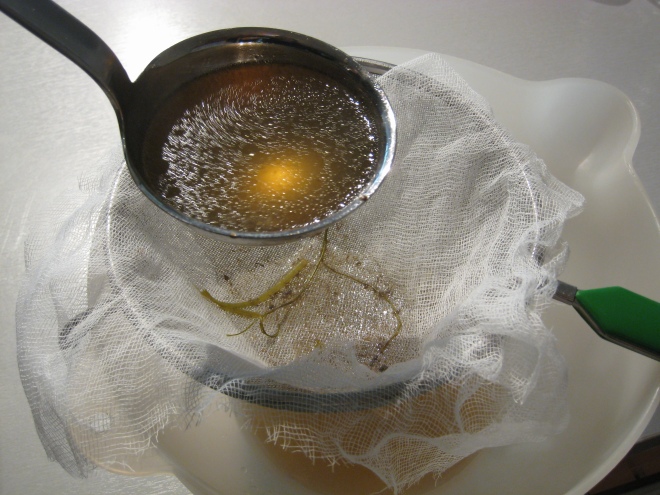 I store some of the broth in canning jars in the freezer, making sure to leave some space for it to expand as it freezes – if you don’t do this you end up with broken jars and wasted broth. 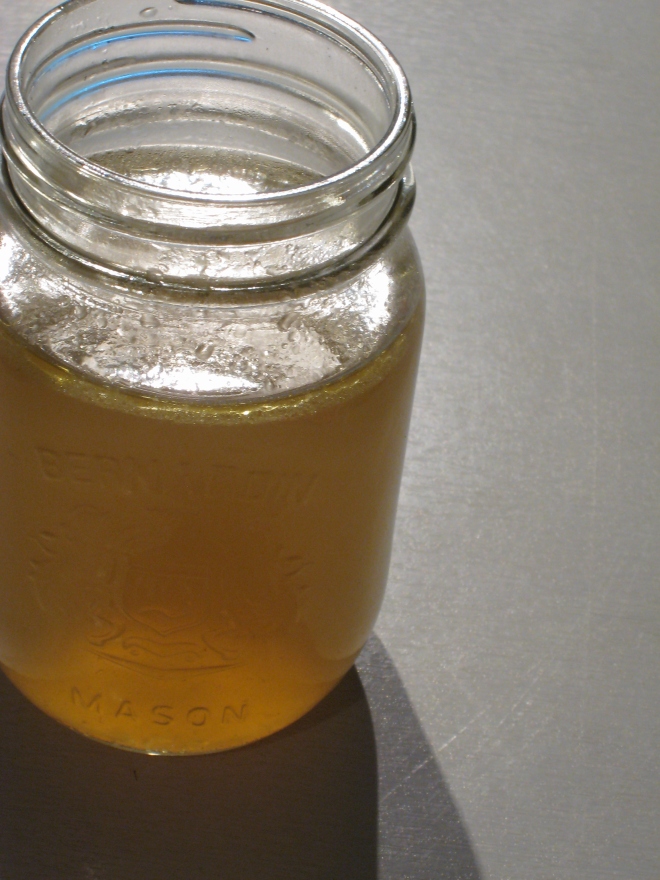 When refrigerated, the best chicken soup broth will become gelatinous – all the chicken stock makers in my family, Oma, Tante Katje, and Mom, say that it’s really good for you.  No reasons why, it’s just “good for you.”

Oma served this with her homemade noodles – something I’ll try after the soup has healed me!