These biscotti are a variant of my usual recipe, which is awesome, but it’s always fun to try something new. These are not the kind of biscotti that you have to dip in coffee to make them edible; they taste great on their own, and you can bite into them easily without moistening them first.

Biscotti are just cookies that have been baked twice – the dough is formed into logs and baked, then sliced and baked again. Simple enough. They keep for a long time, which was why they were invented. But they are so good they don’t usually last very long…

1. Toast the anise seeds in a frying pan or in the oven, then crush them with a mortar and pestle or in an electric spice grinder.

2. Toast the hazelnuts until slightly browned, then allow them to cool before chopping them.  They burn easily, so watch them carefully and toss often.

3. Cream the butter, then add the sugar and cream it further. Add the eggs one at a time and beat until fluffy.  Beat in vanilla and anise liquor or extract.

4. Combine  the dry ingredients and mix in with a wooden spoon until just incorporated.  Add the white chocolate, nuts and sour cherries and stir until just combined.

6. Allow to cool until you can handle them, and then slice the baked rolls diagonally about 2 cm thick and place on the baking sheet with one of the cut sides facing up.  Lower the oven to 300F and bake for 10-15 minutes, until slightly browned.  Turn each biscotto over and bake for another 10-15, until that side is also slightly browned.

7. Place the baked biscotti on cooling racks, and allow to cool completely before packing. Store in an airtight container for up to a few weeks. 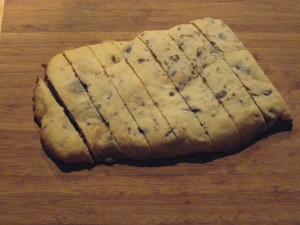