My Oma used to make cookie like this, a spice cookie with damson jam inside, and coated in a crispy egg white frosting. As far as I know she never had a recipe, and I never got to learn to make them from her. Since she is gone now I’ve been trying to recreate, as best I can, her cookie recipe. This is year two in the attempt. This one was successful! Countless hours researching and working, but success nonetheless!

Oma called her cookies “ammonia cookies,” which never seemed unusual to me – that’s just what they were called. Now I realize it doesn’t sound very appetizing, so I’ve renamed them. Baking ammonia, also known as ammonium carbonate or hartshorn, is a substance that was used before baking powder and baking soda. It makes baked goods nice and crispy. But…

But only before they are baked. Then they smell heavenly.

I was surprised when I first opened the bottle of baking ammonia last year, after I finally tracked some down, and was assaulted by the foul smell. Ammonium carbonate is what was used in olden days to rouse a person who had fainted – also known as smelling salts. So this year I opened the patio door wide before opening the bottle and working with the baking ammonia. You can find baker’s ammonia at Gourmet Warehouse in Vancouver, or online here.

This might not seem like the most appealing recipe, but once you’ve dealt with the smell, mixing up the dough, rolling out and cutting circles of dough, filling them with jam and pinching shut, baking, making the frosting and going through the tricky process of coating the cookies with your fingers, well, after that you have some amazing cookies! The nostalgia of trying to make something that my Oma had made, and knowing that some of my family members would appreciate trying them, made the process enjoyable.

And the soundtrack for this lengthy process helped: The Over the Rhine Christmas album, Snow Angels.

The recipe I used is from the 1962 edition of The Mennonite Treasury of Recipes. With instructions like “flour enough to make soft dough,” beat egg whites “well,” cook sugar and water “until it strings??,”and no indication of how to mix, or what temperature to bake at or for how long, I did my best to figure out how to make this work. And (after one batch of cookies was too thick at the seams, and a batch of frosting had sugar lumps in it). . . success! Delicious, no jam leaking out (thanks mom for the extra thick damson plum jam), crispy exterior and frosting. So good! I think Oma would say I did a good job.

A word on the frosting method: last year the struggle was with the jam oozing out, but this year that problem was solved. Today I battled the frosting; the recipe didn’t specify how much to beat the egg whites, nor did it tell me what sugar and water forming “strings” meant. So after one bad batch (I was stubborn and used it on some of the cookies – not terrible, but they have a lumpy appearance), I managed to figure out how to do it right. I brought the sugar and water to a low boil AFTER beating the egg whites, so it was ready to beat in right away, and didn’t continue to cook or crystallize in the hot pot. Research revealed that the right temperature for the sugar and water is between 110 and 112C, but my candy thermometer isn’t so precise, so I overcooked it. In the instructions below I wrote about how to test when the sugar “strings,” or makes threads. Oh, and then there is the messy messy job of applying the frosting. Yay. I wish I had someone here to film it. My hands were too messy to do it myself.

Needless to say I’ll probably never make these again. Oma, how did you do this, with 5 kids, and all that other food to make? Amazing. Simply amazing.

For me these cookies brought back some good memories – I’m a sucker for nostalgia.

What you need for the cookies: (this is half a recipe)

What you need for the frosting: 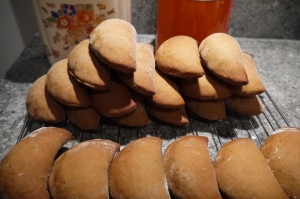 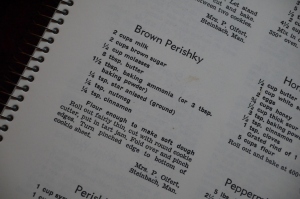