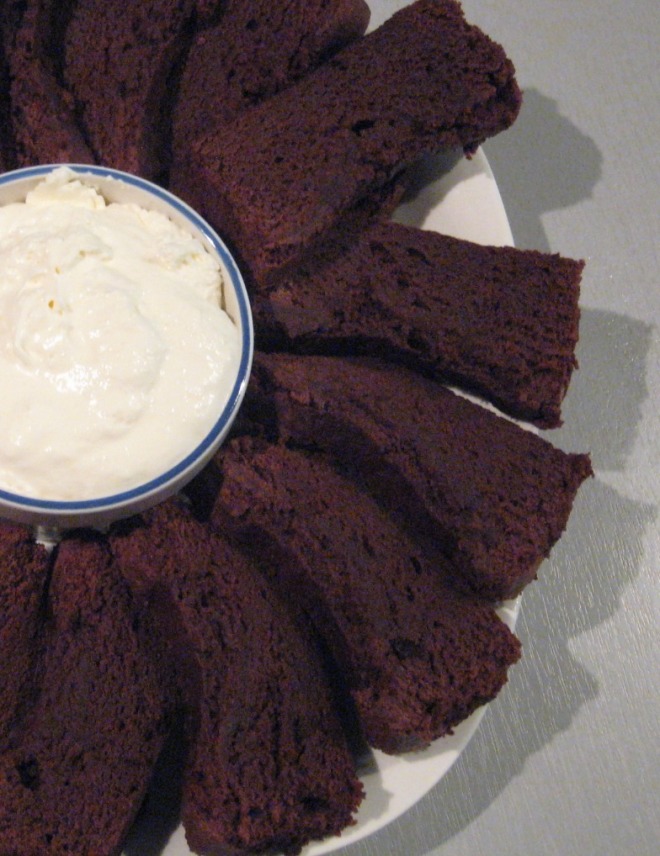 Boozy chocolate cake – what could be better?  It’s got enough flavour and moistness that you don’t need an icing, but of course you can do whatever you want with it.

I found the recipe on awhiskandaspoon. It’s meant to be a bundt cake, but I made it in two loaf pans instead.  I also used strong coffee rather than the espresso powder that the original called for.  It’s moist and flavourful, but not too rich.  It is great served with a little whipping cream, or just a sprinkle of icing sugar to make it look pretty when it is served.

icing sugar for dusting on the top (optional)

1. Line the bottom of two loaf pans with parchment paper (or butter and flour a bundt pan).

3. Place the cocoa in a large measuring cup, at least 2 cups capacity.  Add enough hot coffee to fill it to the one cup mark.  Stir the cocoa and coffee, then add the whiskey and salt and allow it to cool.

5.  Beat the butter until fluffy, then mix in the sugar.  Add the eggs one at a time, beating well.  Add the vanilla extract and chocolate.

7.  Bake for 55 minutes for loaf pans (depending on the size of the pan – test for doneness with a toothpick to see if it comes out clean), or about 1 hour and 10 minutes for a bundt pan.

8.  About 15 minutes after it comes out of the oven you can unmould the cake and allow it to cool on a wire rack.  Sprinkle it with a little more whiskey while it cools!

9.  Serve with icing sugar sprinkled on top, or with a dollop of whipping cream.